Low houses whose looks we did not like.
Degraded state of earthly flesh. 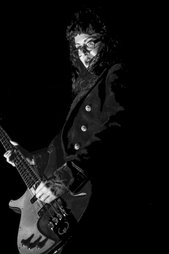 "Oh yes. It comes from a story by Lord Dunsany called Poor Old Bill. About a ship's captain who endures a mutiny after he's learned tricks from the devil that let him curse his men's souls when they sleep. but he learns it from "low houses whose looks we did not like." So Low House as a corollary for the degraded state of earthly flesh. I understand that the american idiom might feel oppressive because english is so fucking EVERYWHERE but I've not been able to think about it using any other name than Low House, which usually means to me that it's the right name. and I've considered them all."    A Dreamer's Tales, Poor Old Bill, par Lord Dunsany, [1910]

Eugene S. Robinson is of course from Oxbow and Whipping Boy. In the company of François R. Cambuzat they again created an awesome detonator. With Gianna Greco (from the transalpine upperground), Kasia Meow (from the Polish avant-rock band Maneki Nekro) and the incredible young French drummer Zoé Martinot, Low House is a blasphemy 60% female.