A feature-length documentary film on the origins and meanings of traditional Senegalese percussions,

from their primary roles in society to the recognized spirituality of these instruments.

The project emanates from the will of Cheikh Ma Djimbira Ndiaye alias Ndigueul Mc, Wolof griot, to make known

the profound identity of percussions by revealing their origins and their sacred dimensions through a feature-length documentary film.

As a griot, his knowledge was transmitted by his parents and masters themselves educated by their ancestors, orally of course. It is a heritage that the director wishes to safeguard if not pass on. Percussions that are not limited to a simple musical function, often unraveled by some Western tourists in search of exoticism such as with the djembè, but is part of a complex process, from their manufacture to their use.

For months, the team scoured Senegal in search of hunters, breeders, artisans, healers, musicians, griots, scientists, therapists, wrestlers to explore the history of these drums, from their making to their uses. Because the materials which constitute the percussions are not chosen at random and correspond to a whole know-how, a ritual of manufacture, of use which is intimately linked to the sacred. Wood, skins, sticks, strings, any material that makes up the percussions is extracted from nature in a traditional and ritual way and then merged into an instrument which will then have a mystical and therapeutic function more than simply playful.

Drums have a role in the Senegalese society. But where do they come from? How do you get the sabar stick, the skin of the varan lizard that will be used to make the tama with its special sound? Who are they ? How are they made? What does their presence represent in the wrestling ceremonies? In religious festivals? In the rituals of N’döep?

Don't we say in Africa that "When an elder disappears, it's like a library that burns"? The elders are not eternal, and their knowledge is treasures. It was in a sense of urgency that the director took the initiative to form a team in January 2009 and began a long shoot in partnership with the company NNR. Pro. Equipped with a simple 5d camera and a sound boom, the team set out to collect initial testimonials. Raw, real, spontaneous, the subjects and characters show a natural presence and reveal and explain their know-how.

The first images show elders, some of whom are missing today. From the general plan to the close-up, the shootings first of all define the space, set the atmosphere of each sequence by building an inseparable link with nature. The characters' emotions are highlighted, by fixed or close shots, so as not to lose any of these carriers of words. The ritual actions of the characters are filmed as well as every detail useful for understanding the percussion.

This film is a tribute to the ancestral knowledge threatened by a changing society whose youth clings to high technology and identifies with a Western model, to the detriment of an endangered oral heritage. For the director, this is a duty and an emergency.

Some rough video clips before post-production

- Tabala rhythm for divorce among the Moors

- Assembling the Tama: a balance between technique and mystique

- Balabougou the village of Varan lizards

- The lumberjack on the way to transmission

- The zikr Baye Fall serer to the rhythm of the khines

- The old man and the drumsticks

The shooting, which began in self-production, was carried out thanks to the support of the NNR PRO Studio, Hello Asso, Wiarda consul, Eclectica (Ivor Placca).

The French Institute of Dakar and Saint-Louis. (Production and distribution)
International organization of Francophonie. (Production)
The Toulouse film library in France. (Diffusion)

Filming started in 2009 and continued through research and meetings in 2011 and 2016 over 6 weeks of filming.

Pending support, it is scheduled to continue and finalize in January 2020 over 2 consecutive weeks of filming.

Support Cheikh Ma Djimbira Ndiaye in the making of his film 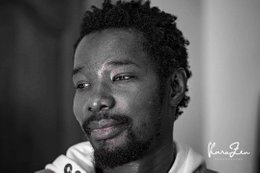 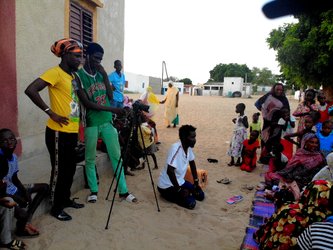 Sabar, Tama, Khine, Tabala: some of the sacred African drums.

Africa has always developed its traditional spiritual beliefs. But over time it has known the influence of religions from elsewhere. It is by an obvious syncretism that certain practices have survived. Thus, the sabar, the tama, the tabala, the khine, among others, accompany many traditional and religious ceremonies by occupying a primordial place. 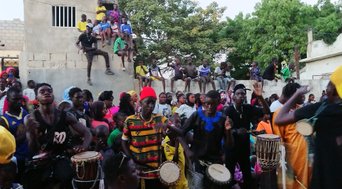 The sabar is a musical instrument found in the Senegalese-Gambian tradition. It is also a means of communication. According to ancestors, the sound of sabars traveled from village to village. When a message was intended for a place too far away, griots from different villages relayed the information to the village where it was intended and only initiates were able to decode the message.

The sabar is also a set of percussions which forms a drum played by seven people (nder, mbëng mbëng, mball, talmbat, lamb, gorong and toungouni). It is played with a stick extracted from the desert date palm (soump), a tree with medicinal properties. Its sharp tips are used to ward off the evil eye in pregnant women, when the belly becomes protruding, from seven months, while the stem is used as a toothpick.

The instrument has seven pegs in reference to the seven different notes. Each ankle must have seven openings, creating a symbolism of seven times seven referring to the seven days of the week and the seven heavens. There are thus seven different magical notes called `` juroom niaari galegn '' which enthrones a king, announce that a virgin has spent her wedding with honor, to initiate young people during the circumcision ceremony, etc. ...

The sabar is made from the skin of a goat, a mystical animal. An animal that is not as obedient as the sheep and has a higher cry than most other animals. It is the animal that is sacrificed during animist ritual ceremonies to satisfy the spirits.

In wrestling sessions, the Senegalese national sport long before soccer, the sabar is a key instrument. Wrestlers have a strong belief that without certain special notes, spirits will not be in their favor, and consequently, their gris-gris (amulets) will not operate. There are thus rhythms which one forbids to a virgin to dance because it would bring bad luck to her. The sabar can in no way serve as a seat, and among its virtues, in popular belief, anyone who attends the making of the sabar will have a guaranteed longevity and will be touched by luck. Finally, a broken sabar stick in the middle of the ceremony will be useful to protect homes. An example of a sacred break: "mbaara bouki, ku ci xamul mbaar degg nga sabbbinu mbaar, mbaara bouki". 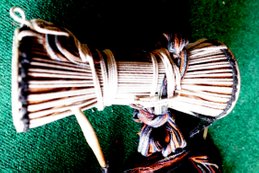 The tama is an instrument used in the West African tradition to galvanize rulers. It is made from the skin of a varan lizard, always captured after the peanut harvest during the rainy season, in a special way and with very special invocations. Some families in Senegal do not have the right to touch this animal, even dead, because it is their totem, their ancestors having made a pact with the animal.

Its religious connotation is based on the fact that it is used during the ceremonies of "n’döep" (ritual consisting in treating people affected by psychic and mental problems) or sessions of adorcism. It is an integral part of traditional African religions. Hence, the patients enter a trance after a few rhythms of tama to commune and satisfy supernatural beings, to free themselves from their ills.

The instrument is made from a wood extracted from the Cayor pear tree, the skin of the reptile is the main element while the goat skin serves as a hoop. After a visit to the sculptor, the two holes that form the ends are absolutely hidden and no one has the right to look there, a tama must be built in total isolation.

The stick is cut from the tamarind tree, a tree known to shelter certain geniuses and in this we say "when the geniuses have a desire for tamarind, whoever ventures to climb the tamarind tree risks a fatal fall".

An example of a very popular break is "Sa ndiaye djiné, djiné kham sa keur té khamo keureum, sandiaye djiné", an exorcist rhythm because the individual recognizes his weakness in the face of geniuses by affirming "sandiaye danse desdjins, djins" - "knows your remain and you ignore his sandiaye djins ". The participants thus implore the evil spirit to come out of the body of the human being. 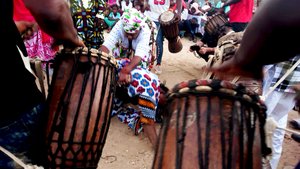 The khine is of the same family as the sabar but it developed with the advent of the Baye Fall ideology.

It has the shape of the lamb, their difference being in the resonance box, that of the khine being open.

The "Baye Fall" movement is a branch of Mouridism, a Muslim brotherhood born in Senegal in the twentieth century based on worship of the Lord and work. Over time, after having embraced the cult of Baye Fall the Serer people have accompanied their incantations of khines to harmonize their traditions with religion. The khine has remained specifically the instrument that accompanies their religious songs. We recognize them as the "baye fall" by their multicolored boubous (ndiakhasses), their locks (ndiagn) and their large belt attached to the waist.

The skin preferably comes from that of a doe because it is more resistant and lasts longer. This kind of skin is also preferred because the animal enters the story of the prophet Mohamed, the latter having delivered it from the hands of a hunter so that it can continue to breastfeed its young. 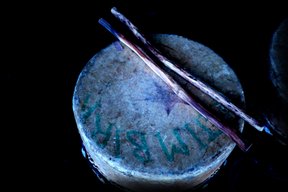 The tabala, an ancient Arab Muslim tradition. The tabala was used to announce a wedding in the time of the Prophet. Seven blows of tabala will announce a marriage while three morning blows will declare a divorce.

The tabala was also an accepted instrument during the reception of the Prophet in Medina during the Hegira. In some countries, it is still struck at the time of the call to prayer. The khadres (Senegalese brotherhood) use it to accompany their zikrs (evocation and rhythmic repetition at the heart of the practice of Sufism).

It is compulsory a man who makes the instrument and this after several ritual sacrifices (cola, dates, sugar, cookies). For the first time, it won't be played on a Tuesday or making it that day. You won't play it without doing your ablution first. We can be sure to enjoy the melodies of tabala every Thursday and some Saturdays in the religious khadres homes (Muslim brotherhoods born in Baghdad in the 12th century) but also during the ceremonies of the return of pilgrims from Mecca.

Some scholars state that "when you play khadres tabalas you hear them in the high heavens". The cowhide used is always collected during a great ceremony (funeral of a religious scholar, of a hero, celebration of great religious nights).

The stick that is used to play is called kéle, named after the tree called grewia bicolor. Several imans in West Africa hold it during their sermons, as well as the shepherds for their flocks and the blind for guidance or as a support for the elderly thanks to its solid rigidity. A tree with protective virtues, to ward off bad luck. A deep belief among the Fula shepherds. 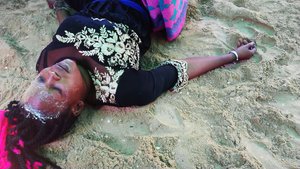 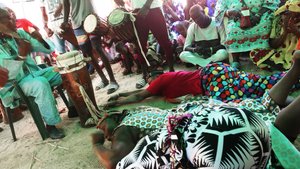 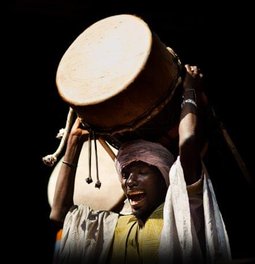