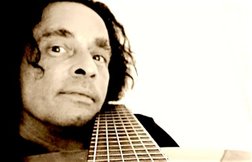 During the period of Islamic domination in Spain (711-1492), the gypsies, originally from India, reached Spain and were allowed to stay there. Flamenco is a fusion of cante gitano with traditional Andalusian.

Flamenco thus finds its origin in three cultures: Arab-Muslim, Jewish and Andalusian Christian. The origin of this music must also be sought in the origin of the people who preserved and transmitted it, that is to say the Gypsy people. The gypsies, originally from India, have preserved large fringes of their culture of origin, namely language (calo) and music. A comparative study of Indian dance (Bharata natyam, Mudras and especially Kathak) and flamenco dance reveals exact similarities.

This art of the people is shaped by joy & suffering. Flamenco is constantly influenced and modified by the social context in which it finds its roots.

Fran de la Frontera lives in the Saint-Jacques gipsy district of Perpignan, France, in the department of Pyrénées-Orientales. Former continental capital of the kingdom of Majorca, Perpignan is now a bridge between the Iberian Peninsula and the south of France. 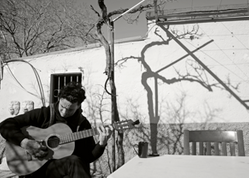 In the last century, the Saint-Jacques district lived to the rhythm of immigration, Spanish, Portuguese, harki, pied-noir.Today, the district is inhabited by some 4,000 Catalan gypsies, installed here for almost a century, by Maghrebians and some "payoo", as the gypsies say to define the others.

Music reigns over the neighborhood, and the music of the neighborhood is of course gypsy, between catalan rumba and flamenco. Fran then takes the name of Fran de la Frontera and walks through his secret garden : he juggles with flamenco palos - buleria, solea, sevillana, guajira, tenuo, farruca and allegria - learned from the hands of master Alain Diaz from Perpignan-la-Métisse.